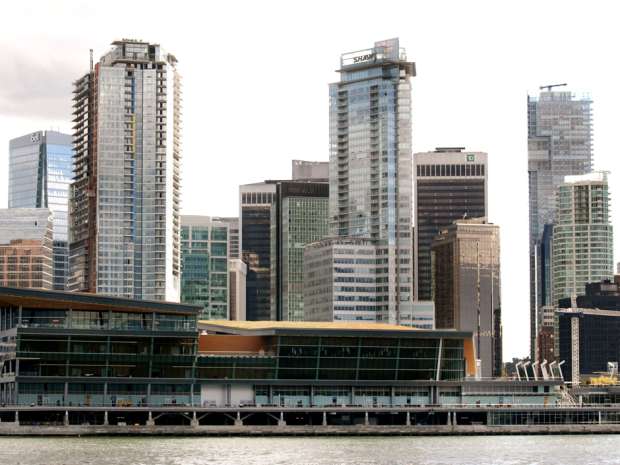 Real estate activity in Vancouver is spilling over into the commercial sector which saw sales activity jump 34 per cent in just one quarter.

Real estate activity in Vancouver is spilling over into the commercial sector which saw sales activity jump 34 per cent in just one quarter, easily eclipsing the previous high, according to a new report.

Commercial real estate service provider Altus Group said Wednesday that there were $3.75 billion in real estate transactions in the second quarter of 2016 — the sixth straight quarter of growth in British Columbia’s largest city. There were 875 transactions of more $1 million in the quarter.

The number of deals in the quarter jumped from just 596 in the first quarter, a 44 per cent increase and the first time since Altus began recording data that deal levels were over 600 in a quarter. Just two years ago, the dollar volume of quarterly deals was hovering around $1 million.

“The record-setting first half of 2016 has been fuelled by a combination of both high value asset trades as well as a sharp uptick in the deal velocity,” said Paul Richter, director of Altus Data Solutions Canada. “The diversity in the market in terms of asset-by-asset contribution at all price levels, will remain key in maintaining momentum going forward.”

Mark Goodman, a principal at HQ Commercial, which sells apartment buildings in Vancouver, said sales have exploded in his sector with overseas money driving much of the investment activity.

He calculates that over the first eight months of the year there were 145 apartment transactions, up 44 per cent from 2015. Dollar volume during the same period climbed 93 per cent to $1.3 billion.

“What is happening now is unprecedented,” Goodman said. “The numbers are just staggering. Something is shifting. In my 15 years, we’ve never had this many proposals (to sell) on the go. Twice a day, every day for three weeks we have been getting calls for apartment owners, land owners. There is a rush to get apartments on the market.”

Apartments are impacted by a 15 per cent additional property transfer tax on foreign owners in the Metro Vancouver but Goodman said the buyers are local residents or permanent residents who are getting injections of capital from offshore. “Is that a foreign investor (who has to pay the tax)? I don’t know,” he said.

CBRE Canada, a real estate service company, is expecting record investment from China in Vancouver in 2016 at all-time highs for prices.

“Canadian real estate should be the beneficiary of continued flight capital from China and increasingly Europe, in light of the turmoil surrounding the Brexit and the perception of the U.S. being late in the cycle,” the company said in a report.

The data relating to real estate on this website comes in part from the MLS® Reciprocity program of either the Real Estate Board of Greater Vancouver (REBGV), the Fraser Valley Real Estate Board (FVREB) or the Chilliwack and District Real Estate Board (CADREB). Real estate listings held by participating real estate firms are marked with the MLS® logo and detailed information about the listing includes the name of the listing agent. This representation is based in whole or part on data generated by either the REBGV, the FVREB or the CADREB which assumes no responsibility for its accuracy. The materials contained on this page may not be reproduced without the express written consent of either the REBGV, the FVREB or the CADREB.